It’s been a minute since Nike’s released a new NTM, but, appropriately so, the next series up for grabs is in the World Cup spirit. If you’re rooting for anyone outside of the USA, Brazil, France, or England, you’re kind of out of luck, but they’re nice to admire either way. Those red England tights would make nice yoga leggings any day, I think.

This is a PSA for Father’s Day, which is this upcoming Sunday should you be behind. If your dad is like mine, then the official World Cup match ball is the perfect gift. Easy. Done. This year’s model, the Brazuca, is super nice and has a unique texture unlike previous WC balls. It also feels considerably more solid than say the 2006 +Teamgeist. Get it here!

Also, here’s a bonus video from Paul Smith, who created his own limited edition World Cup ball. Sold out, unfortunately. 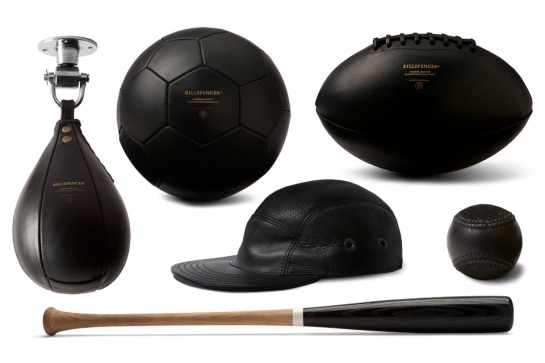 Los Angeles-based leather goods brand KILLSPENCER recently launched their Athletics line of sport essentials, and the quality looks outstanding.  Made in the USA, KILLSPENCER maintains an excellent commitment to craft, which is clearly reflected in the assortment of baseball, football, soccer, and boxing core items. All that’s missing is a baseball mitt, which I’m sure Spencer and team have already though through.

So, here’s my complete bracket for the 2012 Euro Cup. It was a tough one. Like any sports bracket, you have to keep in mind: 1) Which team is fully healthy, 2) who could be a darkhorse, and 3) am I picking practically instead of emotionally? Eventually you just have to make a pick and hold your breath.

Just filled out my Euro Cup brackets. I’ll share my entire predictions when the tourney kicks off June 8, but here’s my pick for the overall winner.

Hey party people! Everyone enjoys receiving proper credit where it's due. If you notice anything is mislinked, please let me know! Likewise, unless stated, all photo, graphic and layout elements are original to SOUTHBOUNDSUAREZ, so if you wish to re-post, remember to re-link. Caring and sharing. It can be fun.
Loading Comments...